The Hegra Fortress was built from 1908-10 to defend against attacks from Sweden following the dissolution of the union between Sweden and Norway in 1905. During the outbreak of World War II, Hegra Fortress was armoured with several canons. Around 280 Norwegian freedom fighters occupied the fortress in April 1940 when the German forces entered Norway. However, several volunteers were sent home owing to a shortage of uniforms and weapons. Under the command of Major Hans Reidar Holtermann, the force comprising of 22 men and one woman resisted a powerful 25-day assault by the German forces. When the plan of an allied invasion in Trøndelag collapsed, the defence of the Hegra fortress was surrendered, and the German forces entered the fortress on 5 May.
There are no public transport services to the fortress. The closest bus stop is Hegra Sparebank on the E14. As the road up to the fortress is narrow and steep, we recommend leaving caravans in Hegra.

Show all nearby accommodations 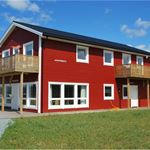